Iterations and loops in EasyMorph

Loops in EasyMorph are done in a way typical for functional programming – by iterating through a list of values. In our case – by passing values of a column to another EasyMorph project as parameters, and running that project once per each value.

As you can see from this example, Project B is run as many times as the number of values in Table 1 of Project A, i.e. 3 values = 3 iterations. 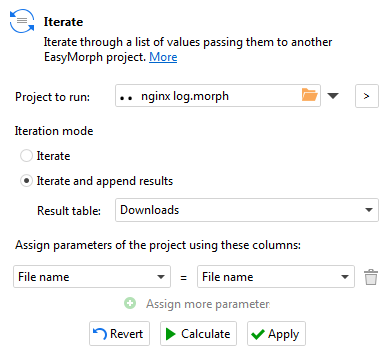 This transformation has two modes:
In our example we passed one field as one parameter, but you can assign multiple fields to multiple parameters. Not assigned parameters have default values.

Iterations is a very versatile mechanism, useful in various cases:
Note also that the project to run can be specified by a parameter as well. This allows building iterations, where different parts of a list are processed using different projects (requires two levels of iteration).

For those who used to traditional FOR .. NEXT loops iterations might look unusual at first. General design pattern with iterations is to build a list first, and only then iterate through it. For instance: take a list of dates, filter out weekends, then iterate.

Iteration lists can be loaded from an external file or a database. Also, there are several transformations in EasyMorph that generate lists:
Iterations are available in EasyMorph starting from version 1.8.