The blog is moving to the Community forum

Our publishing was historically split between this blog (which appeared first), the EasyMorph Community forum (which was created later), and our newsletter. This was confusing for our users, some of which didn't know about the Community while some didn't realize that there is a blog.

To simplify our communication, we're consolidating all our publishing activity on the Community forum. We will keep sending out the newsletter too, which will contain the best "How to" articles from the Community, and news about new features and updates (when applicable).

This blog will no longer be updated.

The kind of articles we used to publish on this blog are now published in the Articles category on the forum.

Release notes are available on the download page, and cover both Desktop and Server.

For RSS readers, subscribe to our RSS newsfeed: https://easymorph.com/feed.rss.

We've just released EasyMorph v3.9.1 (both Desktop and Server). One of its major new features is the easy publishing of datasets from Desktop to Server and retrieving from Server back to Desktop. While it may look as a minor feature at first glance, there are 4 good reasons why you may want to start hosting your data on EasyMorph Server:

Easy publishing from Desktop to Server

When you keep datasets on Server instead of local drive, there is no need to use calculated parameters for paths to files in EasyMorph projects. Datasets will be loaded from the same location on Server no matter if your project is executed on Desktop or on Server. Therefore you can simply publish a project from Desktop to Server without any additional configuration of file locations.

It works well even for large datasets. Because the dataset format (.dset) is highly compressed and close to the internal representation of data in EasyMorph, loading a big dataset from Server over a network can be much faster than loading an equivalent CSV file stored locally. 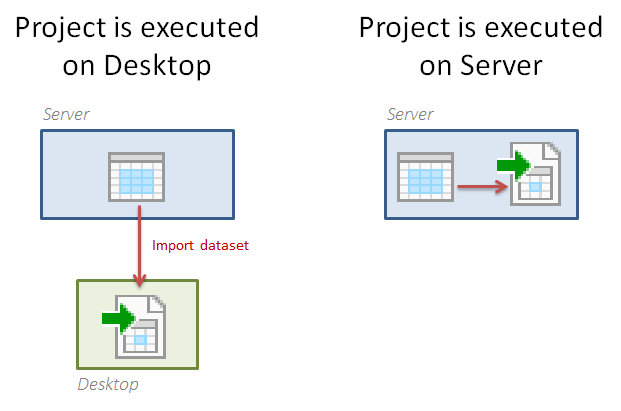 Sending a interesting dataset to your colleague is now very easy: right-click the action which result you want to share, choose the "Send to Server" command, pick a folder on Server, and press "Publish". Then tell your colleague the folder location and the dataset name. The colleague right-clicks the Desktop workspace (the grey background behind tables), chooses the "Receive from Server" command, and receives the dataset in seconds, even if it contains millions of rows. 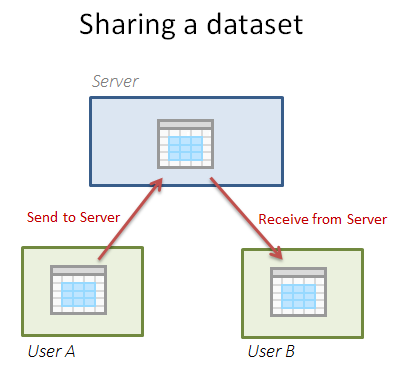 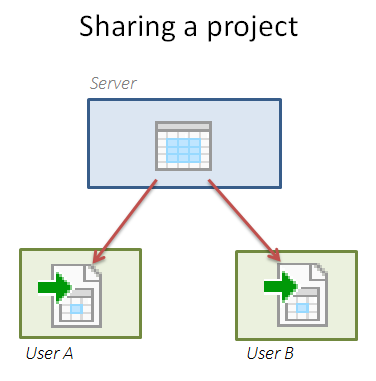 Using Server for hosting source data instead of local files also works better from a security standpoint. Source data files have limited protection when you share them via a network folder or email message. However, when datasets are hosted on Server no one else will be able to access them unless they have been given access to the Server space that hosts the datasets. 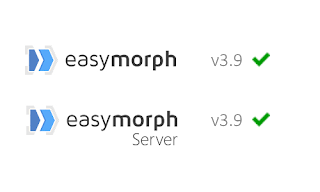 EasyMorph version 3.9 is now available for downloading on our website. The new release adds  powerful new automation capabilities to EasyMorph:

Our goal is to make the everyday work of a data analyst as automated as possible so that tedious activities take less time, and more time can be spent on interesting and high-value work. Receiving data files by email and further processing them is a daily and monotonous routine for many people, but now it can be automated with EasyMorph. The "Fetch email" action introduced in v3.9 automatically retrieves email messages with attachments from Exchange as well as from mail servers that support IMAP (most modern mail services do).


Using this action, it is possible to automate the process of receiving data files from email attachments and then transforming them with further uploading into a database, or publishing them to a Tableau Server, or transferring to another machine through SFTP (more on this later).

With a bit of creativity, more advanced scenarios can be accomplished, for instance:

It is now possible to automatically send to and receive files from a remote computer via SFTP (FTP over SSH) and SCP. Key pair authentication is supported as well as use of a proxy.

Note that sending files by regular (non-secure) FTP is not supported.

With this release, EasyMorph (Desktop and Server) has become a versatile tool for automated data collection and publishing. It can now be done in multiple ways which cover the vast majority of cases in a corporate environment:

This release introduces for the first time, the ability to save and load EasyMorph datasets into files in the native EasyMorph data format (.dset). The native data file format stores data in a form that is very close to the internal data representation in the EasyMorph’s in-memory engine. Therefore, saving a dataset into a file and reading a dataset from a file doesn’t have performance overhead issues such as data conversion or compression/decompression, and therefore is very fast.

The native format compresses data. The compression ratio on par with Tableau Data Extracts (.tde) and Qlik QVDs (.qvd). The difference is typically within 10% deviation compared to one or another format depending on data type.

Later we will add the ability to publish datasets to and load from the Server in one click. This will make the Server a convenient place for collaboration -- storing and sharing even large datasets with millions of rows.

This newsletter is the last one in its current form. Starting with out next newsletter, we're introducing a new format, our "Data Preparation University" where most of its content will be dedicated to practical advice on data preparation for beginners and experienced users. We will continue to include short overviews of new releases, however the main description of what's new will be in the release notes that accompany every new version. 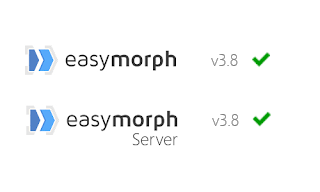 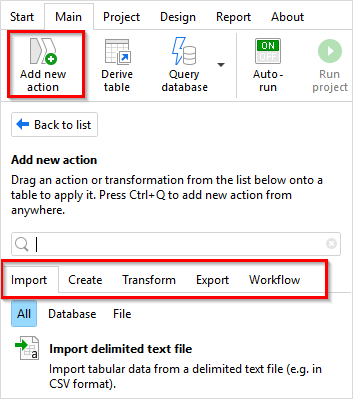 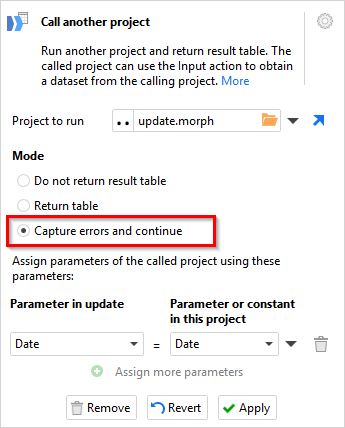 TORONTO, April 19, 2018 — EasyMorph Inc., a provider of self-service data preparation software for non-technical business users, announced record growth in its first quarter ending March 31, 2018. The company has achieved its highest revenue since its inception in 2015 and added its one-hundredth customer, a 300% increase in its customer base within the past year.

EasyMorph launched in 2015 with a vision to empower non-technical business users to easily merge, filter and manipulate data from multiple platforms and data sources without having to code or do complex programming. To date, there are over 15,000 downloads of the software with users in 20 different countries.

"We have added our one-hundredth customer in record time and I see it as a confirmation of EasyMorph's vision," said Dmitry Gudkov, Founder of EasyMorph Inc. "Reducing dependency on enterprise IT departments lets our business users solve data-related problems autonomously without delays and bureaucratic hassle."