Beta of EasyMorph version 2.8 is now available for downloading. This version introduces a number of fundamental changes that boost the data analysis capabilities of EasyMorph and make it even easier to use. Version 2.8 is a half-way milestone on the way to version 3.0. It makes core technology of version 3.0 available now, while more improvements will follow. Full list of changes is available in Release Notes v2.8. Here is a summary of it:

Now EasyMorph tries to silently run transformations in the background when you change transformation settings, add or remove a transformation, or change a project parameter. It means that after any change tables and charts (yes, charts) will update automatically, without a need to explicitly run the project. This feature is called Auto-run and it offers a rather untypical, spreadsheet-like experience. We received extremely positive feedback on it from early users of the new version and I highly recommend trying it yourself.

The Auto-run feature greatly facilitates data analysis, as it allows users to manipulate data on the fly, experiment with a calculation logic while instantly seeing its result.

To provide a better insight into trends and patterns in data EasyMorph now offers horizontal and vertical mixed line/bar charts. Charts fit perfectly the concept of multi-step data analysis employed by EasyMorph, as they allow data visualization at any point of a transformation logic. Another interesting feature is that chart calculations and data transformations are effectively performed by the same in-memory engine. All this makes EasyMorph a hybrid ETL/BI tool that doesn't have a border line between data transformation and data visualization, offering a higher degree of freedom in data analysis -- something that is often demanded by advanced users. 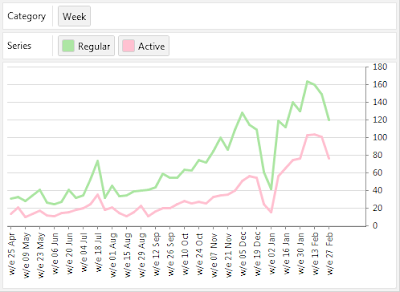 Scripting languages usually do not provide ways to design asynchronous workflows, and even when they do -- it typically becomes a non-trivial task. Now EasyMorph gives one more reason to stop writing scripts and switch to EasyMorph -- asynchronous multi-threaded execution that utilizes multiple CPU cores and reduces project run times on average by 30-40%. Asynchronous execution doesn't require any additional setup. It works automatically, out of the box, even for existing EasyMorph projects.

Now it's possible to add annotations to transformations, tables, charts and projects. The annotations are also included into auto-generated documentation.

We're continuing to expand the spectrum of supported data sources. With this release we're adding support for SAS files (.sas7bdat) and PostgreSQL databases.

We're seeing growing interest to our web-site with the learning page being second most popular after the download page. At the same time our existing tutorial has remained basically unchanged for a year, which hardly helps our users get most of EasyMorph. Therefore, in the next few weeks we will be publishing a new 8-chapter illustrated tutorial with examples and videos.

Version 3.0 is also keeping us busy. We're planning to release it in May 2016 with PDF reporting as its headline feature. The goal is to make EasyMorph v3.0 a powerful and affordable tool for data transformation, analysis and reporting intended for departmental use in large corporations, and small/medium businesses.
Labels: Release
Newer Post Older Post Home
Go to easymorph.com