It's happened, finally we're releasing version 3.5! It took us 2 months longer to release it than it was originally scheduled. The visual condition builder turned out to be a more complex task than I initially assumed. Databases deal with dates, non-integer numbers and Boolean values sometimes in very different ways with lots of nuances. The fact that EasyMorph operates with decimals instead of floats, and uses so called OLE Automation dates (same as in Excel) made things even more complicated. But now all the issues have been ironed out (at least those that we're aware of currently). Here is what's new and exciting in version 3.5:

This is the headliner feature of this version. Now it is possible to design filtering conditions in queries visually. Just drag a field from the list on the left or the preview datagrid, onto the filtering area.

Using a custom WHERE clauses is still possible. 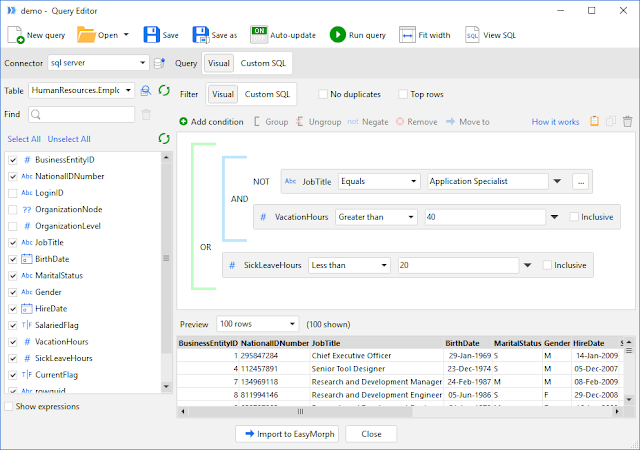 For those who prefer writing SQL queries manually the Query Editor helps saving time -- design a draft query visually, then switch to Custom SQL and the visual query will be automatically converted to a SQL query which you can further modify and run right in EasyMorph.

In future releases, visual conditions won't be limited to queries. We are planning to introduce them in EasyMorph transformations as well in addition to formula-based conditions, where applicable.

EasyMorph keeps all datasets in memory and this provides a multitude of benefits such as the ability to instantly see results of any transformation, reactive calculation, and re-calculating only transformations affected by a change. At the same time, this approach has a downside – if a dataset doesn't fit RAM entirely it would require using one of two special techniques to process it: partitioning and pre-filtering. Partitioning means that we split the source dataset into smaller parts of the same structure, which are processed one by one (typically using iterations). Pre-filtering means that instead of loading entire dataset and then filtering it, we only load a few fields that are necessary for filtering as well as IDs (primary of foreign keys). Filtering produces a subset of IDs, and for those IDs full records are fetched from the source dataset.
These two transformations allow EasyMorph users to work with tables larger than RAM -- tens and even hundreds of gigabytes.

Other new transformations and changes to existing ones 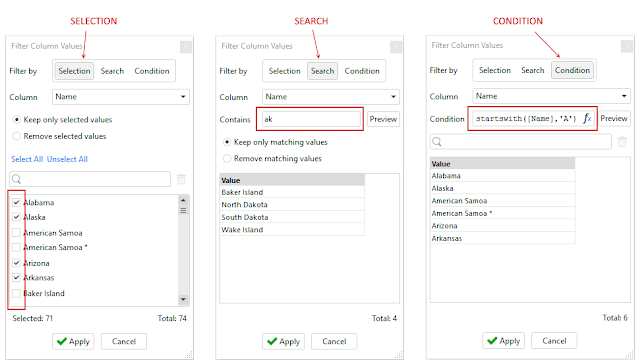 Starting from this release double-clicking a column header brings up the new Filter pop-up which allows viewing/searching unique values in the column as well as filtering (according transformation is created automatically). The pop-up has three modes:
The Unique Values pop-up used in previous versions is discontinued.

In the future release (3.6) we will continue improving usability and closing remaining gaps in functionality. It will include importing fixed width text, loading multiple files without iterations, and regular expression matching. Version 3.6 is planned for release in June this. However, before that there will be another, no less significant event in May – we're releasing the first ever version of EasyMorph Server!
Labels: Features, Release
Newer Post Older Post Home
Go to easymorph.com